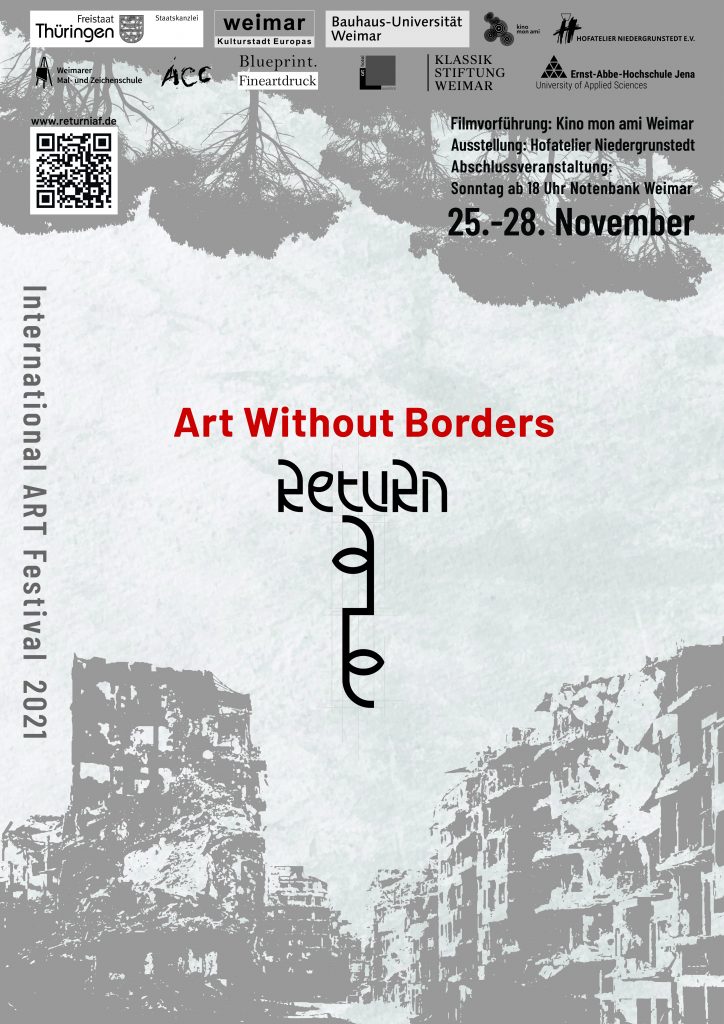 The Return International Art Festival was held from November 25-28, 2021 under the motto “Art without Borders”. It will be held annually in the future with the aim of presenting artists from all over the world.

With “RETURN” we connect the idea of a return to a culture that stands as the basis for a communal coexistence. Thus, the revival of old art and culture will be an important aspect of the festival, which will run through the entire program.

In different areas – film, photography and comics, cartoons, caricature illustration, posters – works of selected artists were presented in the cinema mon ami and in the Hofatelier in Niedergrunstedt.

A special feature of the festival is that no themes are given, but instead only a question:

What is our legacy for the future?

The answer to this question emerges from the works of the artists themselves. The Return International Art Festival attaches great importance to internationality: artists from 80 countries already participate in the festival. In the meantime, 47 short and 3 long films as well as 73 works in the field of visual arts have been selected for the festival from a total of 1600 submitted works.

The youngest participant of the festival this year is 9-year-old Ukrainian Anastasia Shinkarenko in the animated film category, who both directed and drew and dubbed in her film “Magic Head”.

This year’s jury in the film section is made up of Prof. Jörn Hintzer from Bauhaus University Weimar, Iranian director Mohammad Ali Talebi and German director and producer Leonie Minor. For the jury in the field of visual arts we could win the artist Lola Lennartz, the artist Wilfried Malz and the photographer Roman Diller.

As part of the festival has already taken place in a cooperation with the painting and drawing school Weimar 2 workshops with the theme “Future”. In addition, after the festival on 13.01 at 20 clock the award-winning films will be shown again in the ACC Gallery in Weimar.

The festival is supported by the Thuringian State Chancellery, the City of Weimar, the Bauhaus University Weimar, the Hofatelier Niedergrunstedt, the Weimar School of Painting and Drawing, the Kino mon ami, the Notenbank, the ACC Gallery, Blueprint Weimar, the Art Hotel Weimar, the Klassikstiftung and the Ernst Abbe University Jena.

For this we say a heartfelt THANK YOU!!!